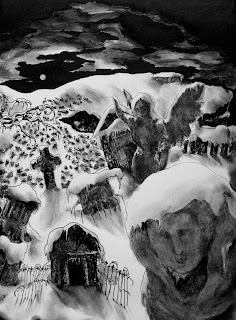 There's not much for it, here, except to point you over to Grognardia's much better review and then add some of my own dithering commentary here to fill out this post.

First off, I was very pleasantly surprised by Death Frost Doom. On the whole, I've been displeased with the current slew of Old School modules on the publishing line. I'm not going to start talking specifics here because I'm not interested in starting a backdraft (with all 10 of my regular readers, yeah . . .) or engendering hard feelings through a hobby discussion portal. No doubt half a dozen folks will charge in and tell me just how wrong I am, but I will say that, in general, I feel that most of the modules I see coming out of the various publishers and the OSR fall prey to the same fault: they try too hard to imitate the Old School feel and atmosphere and fail at being good modules in their own right. This isn't to say that they're bad modules: they're not. They just, in my opinion, focus too much on imitation and not enough on innovation.

Jim Raggi's Death Frost Doom module, on the other hand, is very impressive in that respect. He certainly has respect for his inspirational material, and it shows strongly in his work, but at no significant point does the module come across as imitative of a particular thing except in spirit. In short, the module relies more on the atmosphere of the weird tale and less on the formula of the weird tale. And it certainly has an atmosphere that is unique among its fellows and makes it stand out.

I'm not going to go into details because James has already done a better job of that than I ever could: not superior only in writing skill, but in knowledge of the source material. It is notable, though, that there are a few places where the author's affection for the Evil Dead series shows through a little more clearly than in others.

One of my favorite things about this module, though I'm sure Jim will shout at me that I'm a clueless noob here, is that it is quintassentially Middle School. There is a story to the module, a strong and interesting backstory, but if the players don't learn it, it's not detrimental at all. It's also loose and vague enough that it can be comfortably bolted onto an existing campaign without too much struggle. One of the most rewarding things I can see in this module, from a player's point of view, would be learning what the hell went on at this place, what was buried there, and getting out alive to tell of it, being able to tell tales in the tavern later on that you outsmarted the pitfals and dangers of this place and came away filthy stinking rich for it. Or, if the players are incautious or just flat out stupid, this module has the capability as written to remake a significant portion of the campaign setting.

Well done, sir. I look forward to tormenting players with this one in the near future.
Posted by Hamlet at 9:35 AM

Hamlet
NJ, United States
A Middle School, rapidly approaching middle age, gamer born into the sad and decaying world of AD&D 2e and wondering just where the red-headed stepchild of the D&D world fits in.