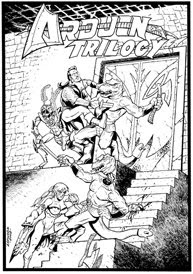 As recently as a few days ago, Emperor's Choice has re-released the original Arduin Trilogy in the new format. The volume is 543 pages of meandering, zany, and always interesting prose penned by Dave Hargrave thirty some years ago. Many, if not most, gamers have at least a passing familiarity with Arduin, even if it is only having heard the name and some of the odder additions to the fantasy world.

This compilation and editing of the original three grimoires assembles all of the material and reorganizes it into a more sensible fashion. That is the main drawback, one might say, to this book: there's no new material here except for a bit of artwork peppered throughout and clarification of the tables. Instead of simply binding the three booklets together as one, they were pulled apart and all attempts were made to put the disparate parts together, pushing the various character sections into one place rather than interspersed throughout different books. Of course, anybody familiar with the material will know that such a task is nigh impossible, and even such little part as I played in it myself was enough to push me to pull even a few more hairs from the top of my head. Overall, though, this book is far more comprehensible than its predecessors, and well worth the rather hefty price tag if you are a fan of Arduin.

Those looking for a complete game, a complete and coherent system of rules, should wait until the publication of the pending Arduin Eternal, a completely new version of the Arduin game. However, those looking for a strong addition to their own games could do worse. New classes take up a fair chunk of the book from the new standard Barbarian, Bard, Druid, and Paladin to the much more exotic Rune Weaver, Saint, Courtesan, and Star Powered Mage. Each class has level based abilities that in a modern game would be woefully vague, but in the hands of capable GM's and players are the tools to add something unique to the game. For example, the Rune Weaver (practitioners of the oldest and most powerful magiks in the land of Arduin) are able to literally unweave other's magiks at a slow and steady pace, learning and tugging as they go. Over the course of the turns, they are able to learn more and more about the spell and pull more of it apart. However, no details about the effects of unweaving only 25% of a powerful spell would be. It's left up to the GM to determine those effects, if any.

Hargrave also adds some interesting complications to the then D&D rules including a few gems of rules that I've seen some blogs now attempting to replicate. For instance, Dave's rule on Shield Bashing:

On any melee turn, a Warrior with a shield may elect to strike with it instead of with his weapon. Because the striking area of the shield is so large, +4 is added to the attack. The shield will do one point of damage, plus one additional point for every point over 15 of the Warrior's strength. In any case, the shield will "push back" a similar-sized opponent, and has a 2% chance per experience level of knocking him down.

The rule is simple and concise and adds just a little bit of flair to combat that often devolve to trading blows and alternating dice rolls. Just under the heading of shields, Hargrave includes optional rules for the difficulty to attack with a weapon an opponent on the shielded side; the chance that, through pure skill, a warrior can circumvent the shield entirely; and the procedure to use a shield to block a specific attack entirely. Such is the style of the book, that much of it is a sort of "pick-and-choose" a la carte menu of rules rather than any sort of coherent system. In effect, it's less a game in itself, and more of a list of house rules that a GM might or might not find interesting enough to include.

Far more valuable, in my mind, than the innovative magic (or magik as it is known in Arduin) system, new races, new hit point mechanics, and all of the other rules combined is the pages and pages of frank and direct advice from one GM to another on how to handle a game: how to handle an angry players, advice on how the cope with varied languages, an excellent few paragraphs on alignment that breaks from the Law=Good and Chaos=Evil mold, random encounter charts, dungeon cartography standards, and even a random fog and mist generator (which I highly recommend to everybody by the by).

Before it begins to sound like I'm a company shill here, let me say that it's not a perfect book, by any means. Taken as a whole, it is still confusing and compliated. Imprudent addition of the entirety of the new material, or an attempt to take this book as a core rulebook for a campaign will not go over well. Even after its reassembly into a somewhat more coherent mass, it is still scattered and meandering and needs careful perusal lest one get lost and frustrated in it.

For all that, though, I think this book is definately a good buy. In the end, I'll let Hargrave's own words speak for this book better than I ever could:

Some purists do not like to introduce any character types or monsters into their game world unless they have a medieval or "Tolkienian" flavor or base. This really limits their play possibilities as far as I am concerned, for what better worlds to accept aliens than ones that already have a myriad of other strange and weird creatures as residents? . . . They are fun, challenging, and very novel as characters and as monsters. I can still visualize the pair ovf Vegan space travelers trying to figure out how a wand of fireballs worked after they had traded their stunner for it. They ran every test imaginable, and their computer kept telling them "this item does not computer:! Still, it worked when that funny looking guy in the purple robes sold it to them . . .

So don't limit the game by excluding aliens for any other type of character or monster. If they don't fit what you feel is what the game is all about, don't just say NO, whittle on them a bit until they do fit.

That, in a nutshell, is what Arduin (and Hargrave's view of gaming in general) is all about. It's not about gonzo, or zany, or weird in and of itself, it's about the simple belief that anything you find fun should be something that you are trying very hard to add to the game rather than just accepting the arbitrary limitations of somebody else's fun.

First, let me start off by saying that this blog is largely inspired by Grognardia/ and
Monsters and Manuals primarily and many of the other blogs that have sprung up in the "Old School Community." Just cause it isn't mentioned here doesn't mean I don't read it. I find the exploration of D&D's roots and especially the effort to "get at" some of the core conceits of what the game originally was fascinating. I've learned a great deal about the game from the history that James has dredged back into the light for all to see, a great deal of which seems to have been either lost to the general community, or consciously buried. But that's not where we're going here.

Over the course of reading the various Old School and grognards' blogs, I came to realize more and more that, despite my otherwise rabid distaste for what can only be termed "New School," I was not by any rational measure a grognard, nor did I fit comfortably within the realm of the Old School. This is probably because the edition that I grew up is the much maligned red-headed step child of D&D, AD&D 2e, an edition that, at least at the outset, straddled the origins of D&D and the tendencies of The Hickman Revolution (and in the end, the worst tendencies of those changing forces). One might say I came to my gaming maturity just as the concept of "old" got tacked onto Old School. Before that, it was just "school."

In any case, the point of this blog is to explore that strange middle realm between the origin of the game, its roots and foundations on the one hand and on the other the newest trends in gaming and just about everything that goes in between. I want to explore that odd weave of ideas that are exchanged back and forth and create a cohesive middle ground between the two largest forces in gaming and see if the formation of a Middle School revolution isn't possible.

Regular features will include reviews of new game materials, old materials, and the various cultural influences on gaming (movies, novels, television, music, theater, etc.) and how they change our gaming perspective. Later today, I hope to post a review of Emperor's Choice new re-release of the original Arduin Trilogy in a single hard cover volume. I'll also be throwing up long rambling "articles" that focus on various aspects of the game and explore how they would fit into a quintessentially Middle School setting and milieu.

A final note in this introductory post: this is my first attempt at blogging, so please have patience while I learn how things work round these parts. As well, posting will likely be somewhat irregular as I settle into a routine where I try to steal time from the 60+ hour work schedule at the office and time with my loving family spread out across much of New Jersey and Philladelphia.
Posted by Hamlet at 7:01 AM 3 comments: Links to this post

Hamlet
NJ, United States
A Middle School, rapidly approaching middle age, gamer born into the sad and decaying world of AD&D 2e and wondering just where the red-headed stepchild of the D&D world fits in.